Warning Cookies are used on this site to provide the best user experience. If you continue, we assume that you agree to receive cookies from this site. OK
English
￥ $ €
($)
My Account
Sign inRegister 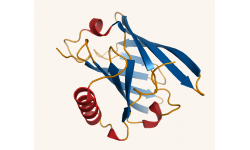 WAP four-disulfide core domain protein 2, also known as Epididymal secretory protein E4, Major epididymis-specific protein E4, Putative protease inhibitor WAP5, WFDC2, and HE4, is a secreted protein containing two WAP domains. WFDC2/HE4 is a member of a family of stable 4-disulfide core proteins that are secreted at high levels. It is expressed in a number of normal tissues, including those of the male reproductive system and regions of the nasopharynx andrespiratory tract. It is highly expressed in a number of tumor cell lines, such ovarian, colon, breast, lung, and renal. It was initially described as being exclusively transcribed in the epididymis. WFDC2 may be a component of the innate immune response in the lung, nasal, and oral cavities, thereby suggesting that WFDC2 functions in concert with related WAP domain containing proteins in the epithelial host defenses. WFDC2 re-expression in lung carcinomas may prove to be associated with the tumor type and should be studied in further detail. Mammary gland expression of tammar WFDC2 during the course of lactation showed WFDC2 was elevated during pregnancy, reduced in early lactation, and absent in mid-late lactation. WFDC2 / HE4 can undergo a complex series of alternative splicing events that can potentially yield five distinct WAP domain containing protein isoforms.

COA is available upon request.